The adventures of Ines & Bjoern

Ines & Bjoern met each other 1998 during their studies. During and after their studies they travelled quite a bit through Europe, Africa and Asia. In most of their trips they used motorbikes to get around. They also spend a couple of years in Barcelona and a year in South Africa.

Find an interview with Bjoern as an Alumni (in German) here

About our newest adventurers: Nils (Aug. 2010) and Lars (Oct. 2012) grow up quickly. Both already travelled to multiple continents using tens of flights and travelled hundreds of days in our camper van. 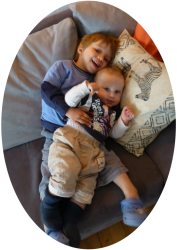 During their time in South Africa, Ines and Bjoern developed the idea of driving back home from South Africa to Europe on motorbikes after their three years stay but had to return to Germany earlier and did so by plane.

The map shows former trips (red). Klick on the map to enlarge the image.